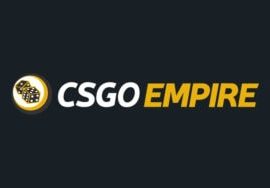 CSGOEMPIRE is one of the top skins-betting sites still in operation after Steam’s new restrictions. It offers players the chance to deposit and withdraw skins for games like Counter-Strike: Global Offensive and Dota2. It is known for their daily giveaways on their Twitter account as well as their daily, weekly, and monthly promotions that give users the incentive to keep coming back for new CSGOEMPIRE codes to spend.
Claim Bonus
Use code CSBET and claim free case.
Pros
Provably fair system
Trusted and solid support
Wide range of deposit methods

Depositing and Withdrawing on CSGO Empire

CSGOEmpire is one of the many online CSGO gaming sites that use skins as currency. The most frequently used method of depositing on CSGOEmpire is to use your Counter-Strike: Global Offensive, Rust, H1Z1, or Dota2 skins. However, they also accept other forms of virtual currency, including Bitcoin and Bitcoin Cash. They also accept deposits via G2A Pay, Visa, Mastercard, Skrill, Neteller, UnionPay and more if you prefer.

The main withdrawal method is CSGO skins, which since the Steam trade restrictions have been put into place can be withdrawn from CSGOEmpire instantly through their P2P (player to player) trade system.

They have this instant option but also a queue for those willing to wait up to a week for the thousands of skins they have locked by the trade timer, which cycle through the instant trade cue every 8 days or so.

As a nice new addition, you may also withdraw your balance in Etherum which is almost instant and with no additional fees attached.

You may be wondering if CSGOEmpire is legit, or safe to use. Luckily for you, Steam’s 7-day trade hold rule cleaned the industry of illegitimate skins-betting sites and left only those with proprietary systems that could withstand testing and user satisfaction guarantees.

If you’re still wondering whether CSGOEmpire is safe, however, you can explore their definition of fairness and how they apply it to their gaming economy.

On their site, CSGOEmpire guarantees that the game is “provably fair.” They do this by assuring users that the results of the game are generated prior to any bets being placed. They even have a system in place to prove this claim.

This doesn’t apply to roulette and coinflip games since the program generates a random rather than a pre-determined result. However, in the main game, these seeds can be compared by programming-savvy users to prove the fairness of the results.

Access to the server seeds allows you to see those generated by previous bets and compare them to the encryptions offered by the site, giving you a definite chance to test the site’s guarantee of fairness if you are so inclined.

How to Win on CSGOEmpire

Here are a few things to keep in mind when joining a gambling site like CSGOEMPIRE. The first is its many promotions and giveaways that make it such a popular option for those that like to play regularly and take advantage of weekly offers.

The prospect of getting free coins and skins makes the experience of gambling on CSGOEMPIRE risk-free, so taking advantage of these offers is a great way to make the most of your money.

CSGOEMPIRE encourages its users to take daily advantage of their promotions with their dedicated Twitter account. They have free giveaways daily, including the random coin rain in their chat feed that appears every 1 to 30 minutes to give participants free coins to use on the site.

They also give users plentiful holiday bonuses and giveaways, as well as unique promo codes for special events. If you refer a friend to the site, you can also nab the CSGOEMPIRE referral code, which is another chance to add free coins to your account with basically no work on your end.

There is also a special promotion at CSGOEMPIRE which promotes friendly competition between the top better of each day, week, and month on the site. This feature is called the “King of Coins” and awards the highest contributors in each time-frame a chance to compete against each other for prizes, awarding points to their account each time they bet.

Regulars at CSGOEMPIRE also enjoy taking advantage of the jackpot bonus, which is 0.4 percent of the total bets on the site within the allotted time. If the bonus icon is rolled, the site divvies up the pot between the eligible users based on how much they’ve contributed to the total bet by percentage.